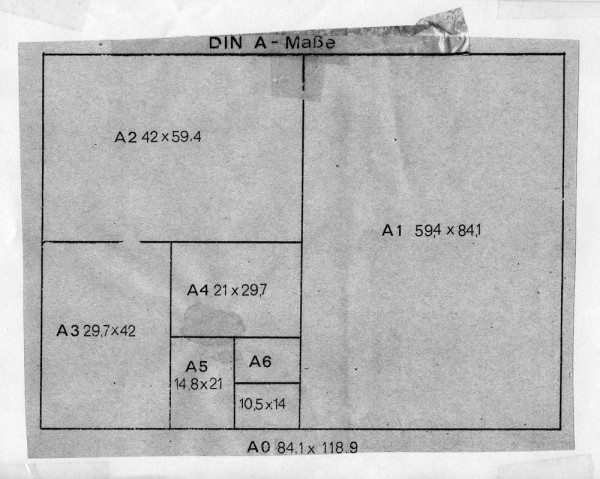 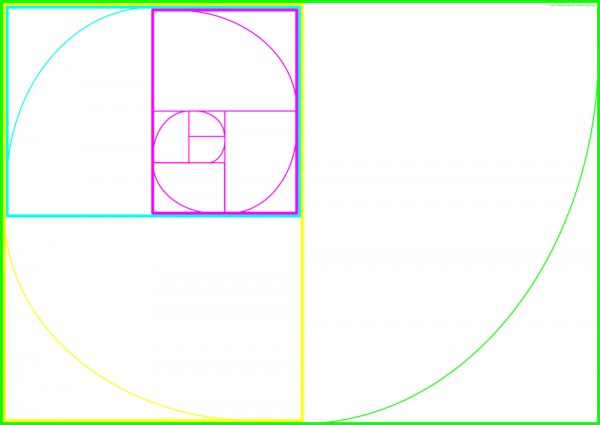 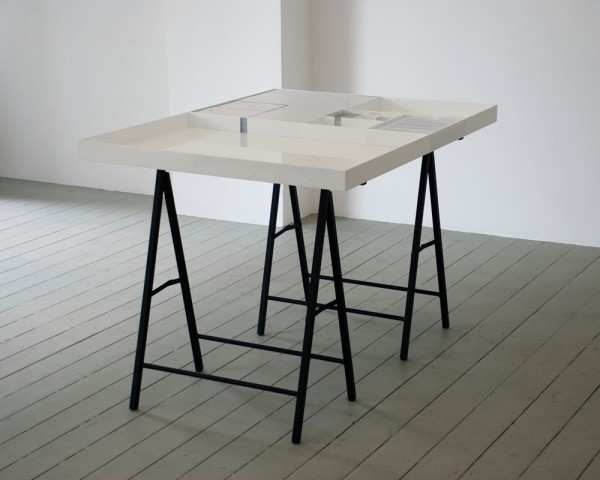 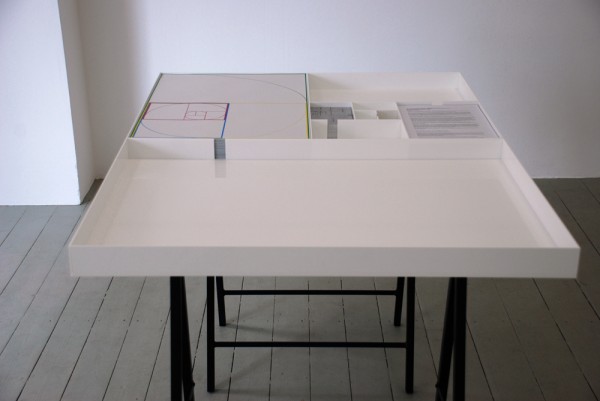 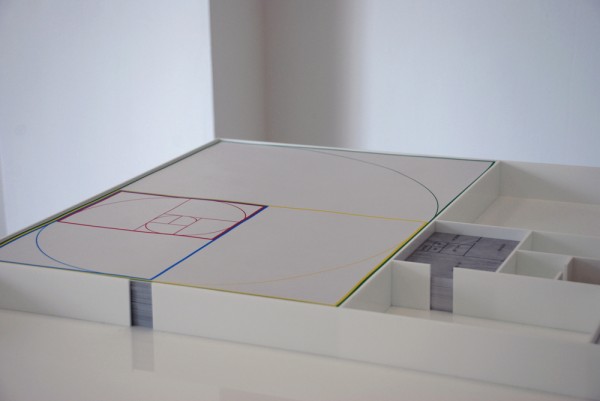 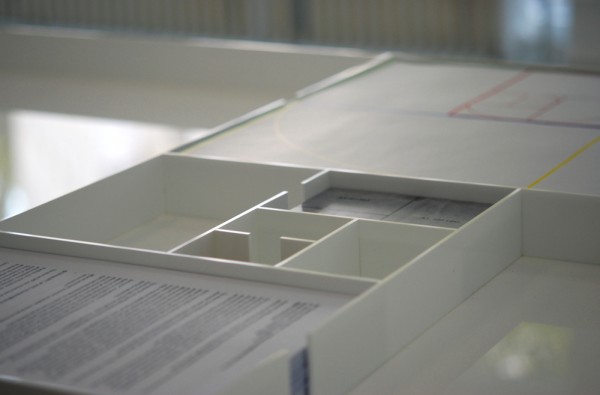 It has been really good to think about the “Din Project” that you are intending to carry out into the future, and also, of course, the piece “Portfolio” that you showed at SMP earlier this year.

For us, for the “Work” show, there has been a lot of discussion around the use of so-called Lochplatten: first as a unifying feature for the show, to hang objects upon—a backdrop, a challenge—and then further, as things have developed in conjuction with the artists taking part, the idea that we could all just take this material as simply a parameter for the show, and allow ourselves to manipulate it. To use it in the show beyond a simple function-orientated use. We feel that it could work as a constructive device in what we hope will be a questioning of Benjamin’s concept of “aura”.

The show is partly about an absence. The absence of a “finished” piece of work. That is, we want you all to show what “went into” making the artwork that you are not going to show.

But it is also about a presence. This presence is the material things that you decide to show, to invoke the absent piece. It’s really a tough assignment for the artists taking part—to work out what to “present”...it’s probable that this will in the end have little to do with “representation.” We’ll see! All the artists in the show have to search their intellect and conscience to decide what to present, and what to hold back. While at the same time not necessarily thinking of the resulting “accumulations” as artworks. (Which they still could be of course, dependent on each individual artist’s declaration.) These objects, from tools, to plans, to pieces of notepaper with phone numbers scribbled on them: when presented in this context, may, or may not appear to have an “aura” for the people who come to look at them.

The show for us is perhaps a stepping stone to being able to think more concretely about Marcel Duchamp’s idea of the “Art Coefficient.” It’s to be hoped that it might become possible to make a show in the future about this.

As to your “accumulation,” it’s my understanding that “Portfolio” was not a finished artwork in the sense that this is usually meant, but an ersatz within the context of the SMP show—and a projection of your ideas into the future about this “Din architecture” that you envisage. So in a sense, the absent artwork does not yet exist here. Or am I wrong? Nevertheless, I could agree to your proposal for an “accumulation” for this show, because of the very concrete nature of this “Din architecture.” It is so clearly delineated that it definitely exists for me, even if I have not yet experienced it!

What do you think? As to the Lochplatten, how do you envisage using them, within the context of your “accumulation?”

The show at SMP was a kind of (out of a) suitcase show .

Portfolio , the central piece consists in a showcase out of acrylic glass containing all the documentation of the exhibition : visiting card, invitation card, text of the exhibition and a poster. At the same time, it’s a model of a space that responds to the DIN format system.

This architecture model is both an exhibition space (that could be built or not) and a showcase for what’s around the artwork but not the artwork.

It could be a space to live in as well and that’s then a project.

Livio Vacchini writes : Drawing up a plan is abandoning oneself to the pleasure of thinking.

As you see, it’s an accumulation of the together organized documentation of the show, its exhibition space and an architecture project.

About the given parameter Lochplatte i think that a piece that would fit in the smallest compartment of the portfolio would be accurate as a beginning and vanishing point of my proposition, don’t you ?

Thanks for the clarification! So it’s true that you don’t see “Portfolio” as a finished piece of artwork? More like a repository. The Lochplatten were conceived as a symbolic device that indicates that what is being shown in the exhibition does not characterize a finished artwork. “Portfolio” almost seems to function as a model of the “Work” show itself, if you strip it of the facets which relate to your personal Din Project going forward. I mean that the artworks in the show as a whole are also repositories, or as I said earlier “accumulations,” and “Portfolio” is possibly the clearest indication of this objective status. I hope. Who knows what the viewers will make of it? Art is always inextricably bound up with its surrounding context, and we are after all an art gallery, and artists...

It will be very interesting to see how the visitors take it. We will provide a text this time, for the first time in the existence of Essays and Observations, to make it easier to read the show in the most rewarding way. I think that “Portfolio” will facilitate this reading, this thinking about the problems of aura, presentation, process, and representation. Hopefully they will also be able to “draw up a plan” in their minds—a plan of the mediation process by which objects are transformed into art objects.

I think that the idea of a small piece of Lochplatte for the smallest compartment is a perfect summation for “Portfolio.” What size do you need, so I can cut it? To the millimeter!

If it’s a finished piece of artwork ? Well, it’s rather a part of it, or even better one of the possible transpositions ; another transposition would be the built space and as you know, this architecture is endless...

Somehow, it remenbers me of that equation from Robert Filliou : well made / badly made / not made. It may almost here be transformed into well finished / badly finished / not finished ?

I like the idea of repository very much, it’s all about this mediation process, this triangulation between the (art)work, the space and the viewer.

Whether the visitors will play the game or not...

You want to cut the little piece of Lochplatte ? that’s fine for me, the dimensions are : 52 x 74 mm, to the millimeter...