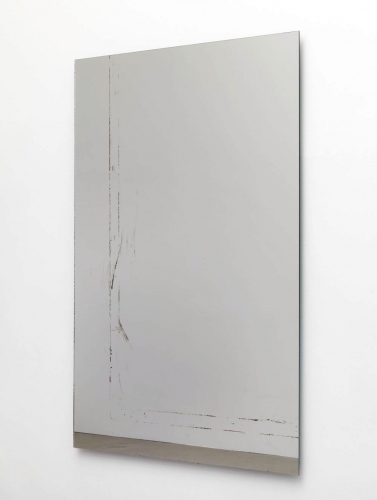 What is live?  Live is immediate, and unmediated.  “Is it live or is it Memorex”, I read, by pure chance, in a blank cd lying next to me, this very second, just now.  Live is the top of the top of fidelity, its the present tense, the full richness of now, the pure Bacharat crystal rock of the present.  Live is what tele-vision purports to bring us.  Live is a rhetoric of truth, what our culture came to know as “truth” when the indexical sorcery of photography had had its run.  Live is control, social control, because she who claims to have the link to live is she who has the power to convince the masses of anything.  But this leads us astray... from Madame... although madame has another key to the entrapments of power.  Madame has the rusty key to the universal wound.  Live wound of pleasure.

Who is madame?  Madame is nothing.  Is Madame live or is she memorex?  Madame is caught in life and memory, caught between memory and live.  Right now she is being played out, in the present tense by the oldest reproduction machine in the world: the mirror (“mirrors and copulation are abominable...”, Borges had once said).  She is played out now as memory. Or rather, perhaps she herself —the masterful madame— plays out  the mirror as a mnemonic device. Madame, after all is not to be messed with, she is a proxenet, the oldest transactor in the world. A mediator of pleasure, an a-prox-imator.  The mirror and madame are one and the same in this spin, they both mediate pleasure,  the kind of retinal pleasure of the Whore House, the secret voluptas of lost souls who are forever caught in madame’s web of sand and fire; looking at their body as it touches another body in a frigid, caleidoscopic symmetry of intercourse.  Madame is the thinness of the mirror’s surface and the density of decades of lust that went by in front of it. All there, all at once, free from its chronology, a multiple, superimposed orgasm without any follow-up.  Eternal and void, left there, enchanted, live (“that is not dead which can eternal lie...”, Lovecraft once wrote). Madame is a surface of unfathomable depth, an irrecoverable life that has gone by; she is only what she saw.

Madame is prudish, she is never to be seen naked in the mirror.  Only she sees herself, only she touches the others, through others and others and yet others.  She is the link to pleasure, not the flesh that gives it.  She is the medium for all the spirits of a house that doesn’t stand anymore, a house of a million appointments.  She amplifies the tenuous panting of a past that turns into its present, that trips into its future. Madame is  pure vanity, and French lipstick of the 30s, in hurried notes, on the thin ice of a mirror, written over and over, to make them stick forever.

Madame is the name of a long gone French brothel in Berlin from which Hervé Humbert  found a remaining mirror, with a slightly chipped corner, and decided to bring it into a gallery...  then he elegantly called it by her name -”Madame”.